Have you ever lied to look cool?

Confession corner: I did, but made a hash of my Pinocchio impersonation. 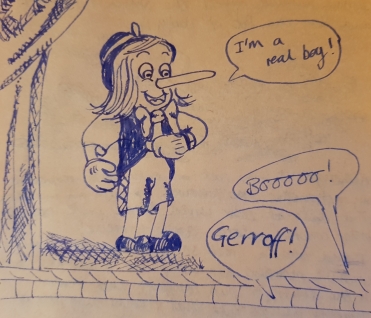 During an introduction, Tall Dark Handsome Stranger inquired about my thoughts on roller coasters.

Initial response: I would rather be trapped in a submarine filled with Crazy Frog impersonators for a month than ride one of those contraptions for 3 minutes of horror. 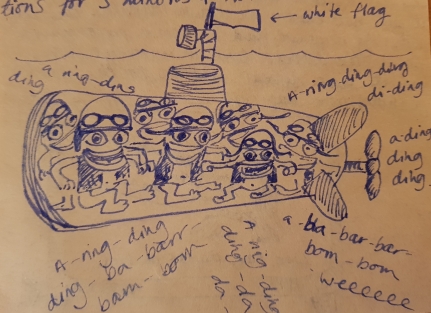 This is the moment the self-assured individual would calmly explain that accelerating upside-down at 60 miles an hour in a spinning, centripetal force is not desirable.

On this occasion however, I had checked my swagger jacket at the cloakroom, revealing a waistcoat of whoppers. The preliminary assessment of available answers rejected the uncool truth after appraising it did not throw me down with the Y2K kids. My response, had it been a performance for a lie-detector test in a foreign film, would have subtle differences in the subtitles to the words gushing forth from my lips.

I had handed myself the Shovel of Claptrap and dug the Pit of Porky Pies.

Although not an enthusiastic response, my affirmative was followed up with an invitation to a date at Lotte World theme park, home to roller coasters galore. Quelle horreur!

I had told a crock so now was the time to continue pretenses, not wimp out. A day was fixed in the diary for fun, laughter and terror.

Time to plunge into that freshly dug Hole of Dishonesty.

Fast forward to the big day and I am participating in a getting-to-know-you chit chat with Tall Dark Handsome Stranger whilst lining for the most aggressive coaster in the park. It is an interesting thing: maintaining a brittle veneer of cool as screams whistle past your ears, each note of terror, a pinprick reminder of torture mere moments away.

Thus far, I felt I was nailing the performance. Call the Oscars! Clear the red carpet! Could Streep perform such an upbeat charade during a calm breathing exercise without appearing to be a person who recently learned to use their nostrils? (Yes, I did just compare myself to Meryl Streep).

The pantomime crumbled as the teenage attendant fastened my seat belt. At the final thunk of the safety bar, I realised this was going to be a joyless joy ride.

The dam burst. Out gushed the truth. 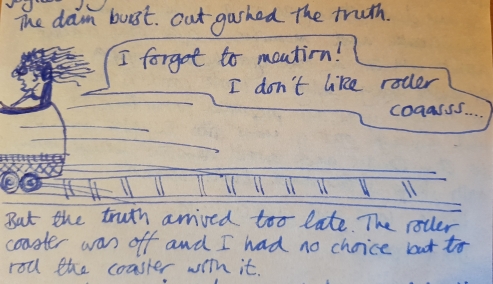 But truth arrived too late. The roller coaster was off and I had no choice but to roll the coaster with it.

Although convinced I had been a titillating queuing companion, my performance on the ride was less enchanting. Swear screams do tend to liberate an individual of charisma.

Six months later and my knees have ceased clattering for long enough to wobble into ‘C27 Cheesecake & Coffee’. Albeit not the original scene of the crime, the amusement park theme is a reminder of my shifty-eyed scandal. Flashbacks are dragged from the memory box marked ‘Spam’. Fortunately, the person beside me is the same individual that invited me for the roller coaster ride along. My lie didn’t put him off but memories of my Screams of Consequence remain a source of joy and delight for him.

So my dear Stranger, as I sit here nibbling on cheesecake and memories, I offer some advice: don’t try to be the big cheese using a serving of dishonesty. Lying to look cool is very uncool, so unless you are prepared for others to get real mileage out of your fibs, I suggest you stick to the truth and avoid narrow-gauge railways with steep slopes and tight turns.

C27 Cheesecake & Coffee – guess how many types of cheesecake they sell.

Hello cheesecake fan! This letter was set adrift in ‘C27 Cheesecake & Coffee’ in the hope it would find its way into the path of a stranger. Maybe you are that stranger! If you are the finder of the letter, or maybe a finder of this blog, I would dearly like to hear from you. Have you ever lied? I won’t judge. I’ve told you my secret, feel free to tell me yours.

With kindness and smiles,